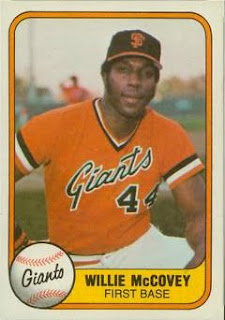 How I am organizing this is I am putting all the cards of players who played their last game in the majors the year before or were not in the majors or minors the year the card came out here. In 1981, the most notable retired player who had a card in one of the sets was hall-of-famer Willie McCovey, who played his last game in 1980. The team the player is shown on is listed after his name. If there is another card number after his name, they had a card in both the Fleer and Donruss set, but not the Topps set.