1984 was a different sort of year for collectors. Maybe this has something to do with my age at the time, as I would turn 11 in September '84. Collecting cards was more about actually completing a set of baseball cards and less about chewing gum for me by this time. The 1984 Topps set was (and still is) the earliest set that I have completed. Beckett Price Guide magazine also made its debut in November 1984. The hobby was changing a bit. I think this was about the time trades with friends were made based less on wanting a certain player for whatever reason, but actually thinking about the actual value of the cards. In 2011, this is funny because these cards are probably worth less now than they were then.

cards produced in 1984, we again get the big three of Topps, Donruss, and Fleer. I think all companies were firing on all cylinders during this year. They all had very good designs, and in Donruss's case, maybe the best in the history of that company. Donruss gave us the first Rated Rookie cards that were noted in the front this year and the set is full of rookie cards that don't show up in other sets. Of course Donruss gives us one of my least favorite subsets again, leading off their set with the Diamond Kings. I can't stress enough how awful these cards look. They look like they were painted as a project in a high school art class. Check out the Lance Parrish card to the left. One of the ugliest cards I have ever come across.

The 1984 Fleer set is about as redundant as any set got in the 1980s. There are only 2 cards in the whole set of active players in 1984 that aren't in any other companies set. No kidding...only 2. You do get the final cards of Johnny Bench, Carl Yastrzemski, and Gaylord Perry in the Fleer set though, which is cool as you get to see their entire career statistics on a baseball card. The bigger news from Fleer is that they also give us an update set of 132 cards. This will give us 14 more cards to help fill in our checklists.

I will start off 1984 providing a checklist of all of the cards I am not considering for my ultimate set, but if you are keeping score at home, you may be interested in these. I always try to keep cards showing highlights of the previous season, but dislike the Superstar Specials and Diamond Kings, so don't bother collecting those. Fleer did have some cards highlighting the 1983 post season, so those will be placed in the ultimate set. I also don't save the checklists from sets other than Topps. 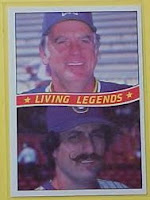 There were two cards honoring players retiring (I know Rollie Fingers didn't retire, I will get to that in a second). I know these cards came in packs with the rest of the set, but they weren't numbered as if they belonged to the set. These may be the first case of insert cards, although Topps did issue a glossy all-star set in rack packs of 1983 cards.

The players on these two cards are A) Gaylord Perry/Rollie Fingers and B) Carl Yastrzemski / Johnny Bench. The interesting player out of these four is Rollie Fingers. Fingers did not play in 1983. He came back with the Brewers in 1984 and 1985 and then called it a career. Why is he on these cards? Was this Donruss's way of placing him on a card, or was there speculation that he would retire? I honestly don't remember.