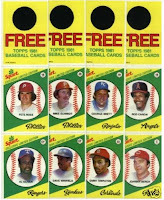 When I was researching the Coke cards, on the wikipedia page for 1981 Topps, it also mentioned that they made a set for another soft drink called Squirt. So I did some digging around to get a checklist and it turns out this is one of those 33 card sets that are quite commonly used to promote a consumable product. Typically these sets have at least one player per team in order to take advantage of the marketability of each team. This set is exactly that. These types of sets are probably useless for the project that I am doing here as the main sets already have the star players, but the checklists are interesting because you can see who was considered the star (or at least marketable) players in any given year.

This set is interesting because after looking on ebay for samples, I saw a pattern to how these were distributed. They were issued in two cards panels that attached to a 2 liter bottle (I am assuming here, I suppose they could've been attached to a regular pop bottle). There were really 22 different panels of 33 cards. This means that 11 of the players were double printed.

So the checklist, which I can't tell if it is numbered or not, from what I could put together looking at ebay auctions is as follows:
Mike Schmidt (paired with Dave Winfield or Cecil Cooper)
Pete Rose (paired with Al Oliver or Chet Lemon)
George Brett (paired with Garry Templeton or Jerry Mumphrey)
Rod Carew (paired with Johnny Bench or Bruce Bochte)
Reggie Jackson (paired with Steve Kemp or Don Sutton)
Dave Parker (paired with Joe Charboneau or Lee Mazzilli)
Jim Rice (paried with Jack Clark or John Castino)
Steve Garvey (paired with Ron LeFlore or Eddie Murray)
Ben Oglivie (paired with Fred Lynn or Dave Kingman)
George Foster (paired with Tony Armas or Rick Burleson)
Bill Buckner (paired with Dusty Baker or Rickey Henderson)

They look like they have more in common with the 1978 Topps set, as the cursive writing is similar and the positions are shown in a similar baseball. There are no players representing Canadian teams or the Atlanta Braves in this set. In 1981, the Braves were the only team in the southeastern region of the country, so maybe this shows Squirt wasn't sold in that area of the country. Also interesting is that the only pitcher in the set is Don Sutton.

These must have been released sometime during spring training because Dave Winfield, Fred Lynn, Don Sutton and Ron LeFlore all switched teams during the offseason and are shown with their new teams for 1981. But Jerry Mumphrey is still shown with the Padres. He was traded to the Yankees on March 31st for Ruppert Jones and a bunch of pitchers. Mumphrey does appear in the Topps Traded set as a New York Yankee.

As I stated above, this is a useless set for my project.
Posted by Kevin at 6:15 AM